The Wizard of Oz, and Asbestos? 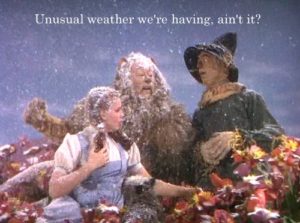 Christmas may be long gone; and whilst many of us wished for snow, the disappointment of having another none-white Christmas was always imminent. Last night we finally got some snow, but some may say it came a bit late, 19 days late to be precise.

If only we could artificially create a near perfect-looking, soft-textured, white substance that we could use every year to bring the essence of Christmas further to light…

Well we can now for a hefty price, but 80 or so years ago what would the answer have been?

You probably guessed already that the correct answer to this question was Asbestos. Chrysotile Asbestos fibres to be specific.

This product was used commonly throughout many of the big winter blockbuster pictures of this time, such as the famous ‘The Wizard of Oz’ and ‘Holiday Inn’ movies. Before this, cotton was actually the go-to product for fake snow, however a firefighter intelligently (and maybe not so intelligently) requested cotton should not be used any further as it presented a great fire hazard.

Of course little was it known about just how harmful extended use of the Asbestosis substance was at the time. But what was known was that it was very cheap to use for prop production, did not pose much of a threat for starting fires, and it was just as close to a replica of snow at the time.

One of the more interesting facts to this story was that production of asbestos-made fake snow did indeed come to a halt, but it wasn’t for health reasons. It actually stopped due to the outbreak of World War II and the fact the government needed the asbestosis material for ships, planes and other military equipment.

It was then replaced back to cotton to become the reoccurring fake snow component, which was less harmful on the most part.

Luckily for those at the time, not much harm should’ve been done. As while inhaling and playing in asbestos that was falling from the sky was very dangerous, it was still very much a seasonal or one-off affair being used in a few movies or at the Christmas period. Exposure would have been limited. Now if it were present in places you have to make frequent contact with; such as in the floor tiles you walk on in your home or in the ceiling tiles you work underneath of at your job, then that might be a bigger problem.